Unless you’re a scientist or microwave engineer, you could probably care less about waveguides. In fact, most people would have a hard time describing one. Despite their esoteric nature, however, waveguides are both more important and far less mysterious than any of us realize. If you talked to your childhood friends using tin cans and a string, you used a waveguide. The last time you went in for a checkup, the doctor used one of the most common of all waveguides—a stethoscope—to listen to your heart. And if you microwaved last night’s leftovers in the breakroom for lunch today, guess what? You used a waveguide. 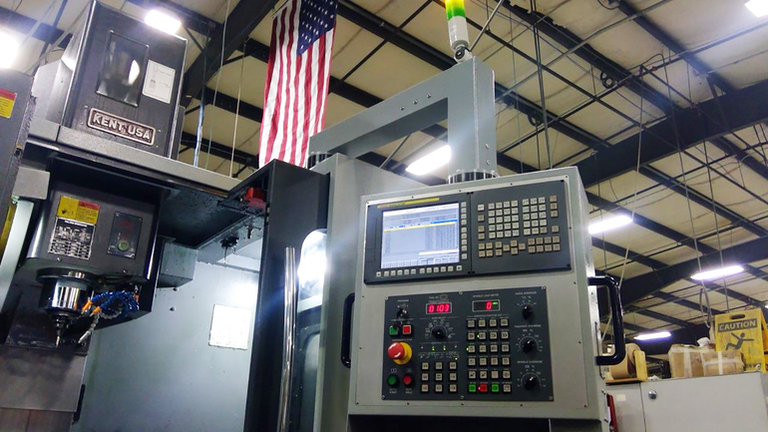 Waveguides are just as their name describes—a guide for waves, herding what are normally omnidirectional ripples of sound or light into a coherent stream of useful energy. They could be acoustic waves, radio waves, or in the case of reheated takeout food, microwaves. It’s this last type of waveguide that most interests Walter Wunderlich, even though the microwaves he’s herding are roughly 100 times more powerful than those propagated by the microwave in the company breakroom.

Wunderlich is the executive vice president for Special Projects at Mega Industries LLC in Gorham, Maine. He’s been there since 1989, when founder Don Paul first opened the doors, and has since watched the company grow to more than 65 people and 38,000 square feet of manufacturing and office space. Today Mega Industries serves a host of national laboratories, including Los Alamos, Oak Ridge, Lawrence Berkeley, and Argonne, as well as Switzerland’s CERN facility, home to the Large Hadron Collider (LHC). 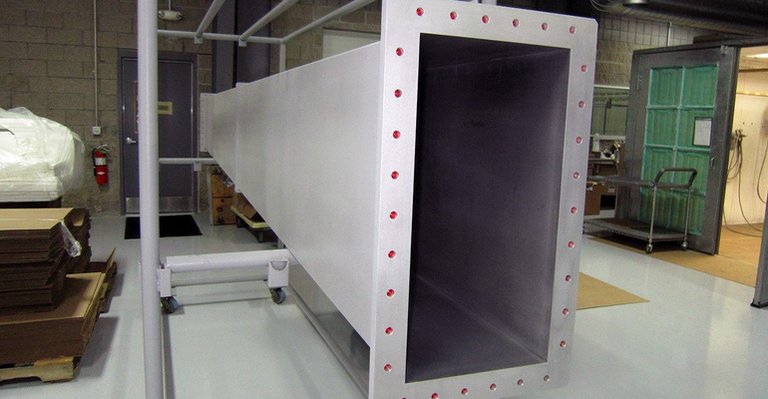 “Most of our products are for the scientific or military sectors,” said Wunderlich. “We work with the likes of Raytheon and Lockheed Martin on the defense side, along with a large number of domestic and international research institutions. These are the scientists who use particle accelerators like the LHC to investigate the Big Bang, or radio telescopes to listen for extraterrestrial life. And closer to home, we also have a number of industrial clients—Hormel, for example, uses our high-powered RF (radio frequency) waveguides for precooking bacon and other foods prior to packaging.”

All of our Ultra-High Vacuum waveguide components, including flanges, are now being ran very accurately through our Kent USA KVR machining centers. These items are heavily used in scientific research and the medical fields. These components tend to be manufactured from pure copper and stainless steel. Any compromise in finish quality will lead to poor RF electrical performance.

It’s heavy stuff, to be sure, yet the machine shop at Mega Industries is quite similar to that of any other well-equipped manufacturing company, with welders, grinders, testing and finishing equipment, and a team of experienced people to run it all. In fact, one of the key pieces of equipment used to produce the high-tech components and machinery needed to support Mega Industry’s diverse customer base is a CNC machine tool found in thousands of shops across North America, one that most any machinist would be comfortable operating—a 10,000-rpm, 15 HP, 24-tool KVR-4020A machining center from Kent USA. 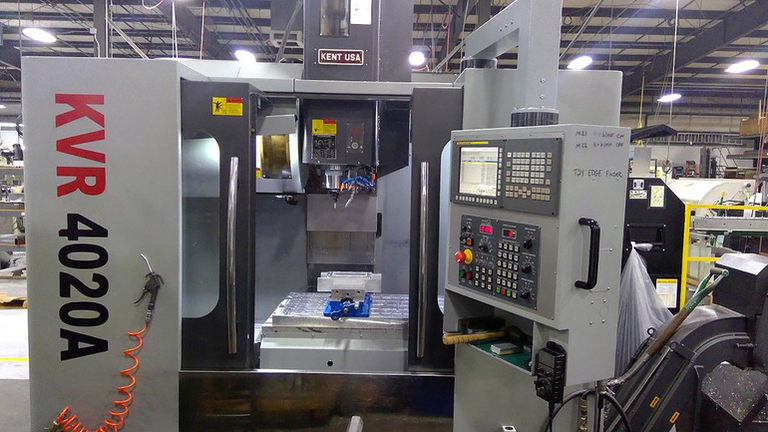 Wunderlich explained that management at Mega Industries decided to purchase a new machining center two years ago. The reason was simple—one of their old machines was tired, and it was time for an upgrade. “Walter reached out to Norman Crepeau, a principal at Machine and Electrical Consultants Inc. (MECI), and we went to look at a machine at a job shop near here,” said machine shop supervisor Mike Ballard. “One of the first things we noticed about the Kent USA was its construction—where some of the other machines we’d checked out leaked coolant and appeared to be assembled sloppily; the Kent USA looked like it was built with a lot of attention to detail.”

The Power of the 4th Axis

The machine was also pre-wired for a 4th-axis, a standard feature with Kent USA machining centers, as well as a spindle chiller and through-the-spindle coolant. “The 4th axis was a big deal for us,” Ballard added. “None of our other machines have that capability, and we knew it would increase our flexibility by allowing us to complete more of our parts in a single operation. We have eliminated multiple setups by using the 4th axis. Our RF load components now come off completed in 1 setup. All in all, the KVR fit the bill perfectly.”

Having the 4th axis and a vise setup now allows for simultaneous operations, such as, milling a shape while holding in a vise then onto the 4th axis for a bolt hole pattern or gas port machining. In addition, unique special components and some R&D/prototype are run on the Kent USA KVR machine with its 4th axis for efficiency.

Mega Industries has its own line of calibration kits for RF testing, many of these components are now run on the Kent USA KVR machining center, where the need for accuracy is paramount.

Wunderlich soon placed an order with MECI for their own KVR-4020. Unfortunately, he received bad news shortly before delivery. “The dealer called to tell us the machine had been damaged during shipping,” said Wunderlich. “I suppose Kent USA could have replaced the dented sheet metal and made it look like new, but that possibility never even came up—they just sent us a new machine, no questions asked. That says a lot about the company.”

The KVR’s performance has also been better than expected. Ballard said the rapid traverse rates are roughly twice that of the old machine, with accuracy and metal removal capabilities to match. The control has also proven to be more capable, with features that “make it easier to get things done.”

Advanced functionality is important with any machine tool, but even more important is reliability. Since its installation, the KVR has been kept busy two shifts each day machining aluminum, brass, and stainless components—during this time, there hasn’t been any unplanned downtime. “Mike and I have been very pleased with the machine’s dependability,” Wunderlich said. “There’ve been no breakdowns, and I haven’t had to make a single service call on the KVR. I would buy another one in a heartbeat.”